Spring has sprung and if you have not had a face-to-face appointment in over a year (you know who you are!), now is the time to schedule one.

One interesting feature of covid is that it hasn’t yet fallen into a clearly seasonal pattern like some scientists had softly predicted. Time will tell.

Though it takes time to sort out the severity of each new strain, the early reports on BA.2.12.1 suggest it will not cause much severe illness and death among the vast majority of people having immunity built up from vaccination and/or covid infection in the recent handful of months. US ICU beds occupied by covid cases remain at a low point of the pandemic, as do daily deaths reported to the CDC: 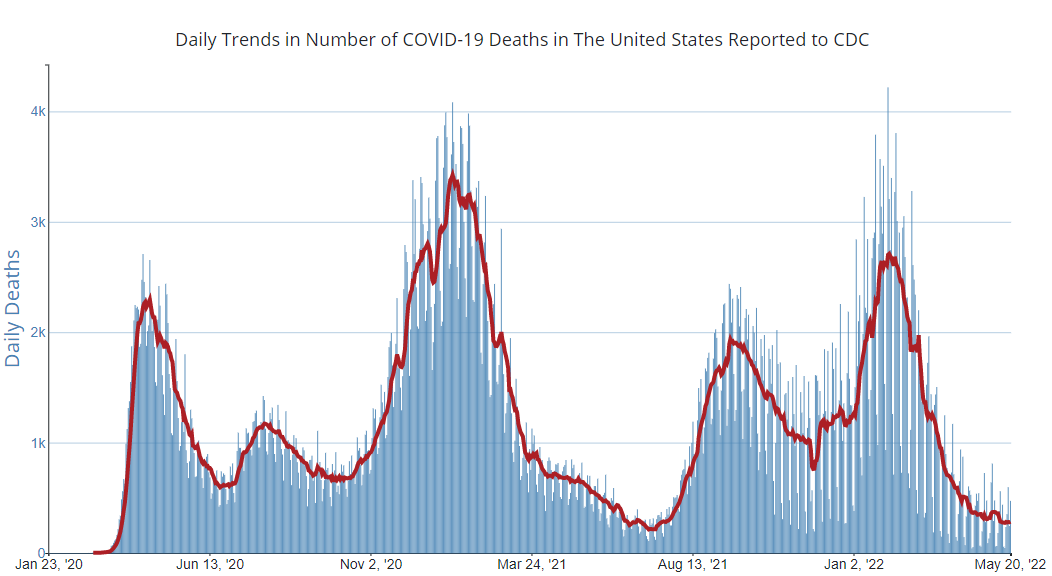 So how is an endemic optimist like me supposed to decide when to recommend oral Paxlovid, as it has been emergency-authorized by the FDA, to people with mild to moderate covid not requiring hospitalization?

Rachel, Nazlee, and I seem to discuss this daily, and we agree that that question seems a bit tougher to answer with each passing week, for three main reasons:

Paxlovid is a medication with two components, one (nirmatrelvir) that that blocks SARS-CoV-2 replication, and the other (ritonavir) that inhibits the metabolism of nirmatrelvir and thus keeps the level of nirmatrelvir high in your bloodstream. To treat covid you take Paxlovid twice daily for 5 days. It was given emergency use authorization (EUA) by the FDA this past December to treat mild to moderate Covid-19 in people 12 years-old and older who weigh >40kg and who are at high risk of progression to severe disease, hospitalization, or death.

What is the evidence that Paxlovid works?

The FDA authorization of Paxlovid was based upon the EPIC-HR phase II/III clinical trial, which randomized 2000 adults with mild to moderate covid but at high risk of severe covid to Paxlovid v. Placebo. “Mild to moderate” meant having symptoms but oxygen saturation (the finger probe) measures that didn’t drop consistently below 94%, and no indications for hospitalization. “High risk” tracked the CDC’s definition of high risk AND the study excluded any person who had received even one dose of covid vaccine or ever had been formally diagnosed with covid. Symptom onset had to be within 5 days of participating in the trial. The study was designed to detect whether taking Paxlovid reduced hospitalization or death from any cause within the next 28 days. It did, in a highly statistically significant way: 0.8% of the Paxlovid group had one of those outcomes vs. 6.3% of the placebo group. There were zero deaths in the Paxlovid group v. 12 deaths in the placebo group. The notable side-effects of Paxlovid were strange changes in taste (mostly metallic taste) and diarrhea, which were the only treatment-related adverse events reported in at least 1% of Paxlovid recipients.

Is Paxlovid active against Omicron variants?

We think so. Since the EPIC-HR study stopped enrolling people by Nov 5, 2021, 98% of the covid variants identified in study participants were the Delta variant, which caused more severe disease than other variants in people who weren’t vaccinated. Currently, Delta has been overrun and accounts for zero percent of US cases. That said, Pfizer informs us that biochemical and cell culture data indicate that Paxlovid should work for Omicron variants too. According to a Yale Medicine Q&A on Paxlovid, “Three laboratory-based studies claim to back this up—two of those studies were conducted by Pfizer, while the third was done by Pfizer in partnership with the Icahn School of Medicine at Mount Sinai. These studies have not yet been published in peer-reviewed medical journals.”

What about vaccinated people taking Paxlovid?

In everything I have read, scientists have agreed that Paxlovid is just as safe to take for vaccinated people as it was for unvaccinated people in the EPIC-HR study. The magnitude of benefit, however, is guesswork for the time being since Paxlovid was not trialed in anyone who had received any covid vaccination.

What about people who have previously had covid taking Paxlovid for a new covid infection?

Ditto. In everything I have read, scientists have agreed that Paxlovid is just as safe to take if you have already had covid. The magnitude of benefit, however, is guesswork since Paxlovid was not trialed in anyone who had received any covid vaccination.

What about close contacts of a covid case taking Paxlovid to prevent covid?

No dice. In April, Pfizer announced that its Phase II/III EPIC-PEP (Evaluation of Protease Inhibition for COVID-19 in Post-Exposure Prophylaxis) trial failed to show that Paxlovid prevented covid infection among a group of 2957 patients who been exposed to a symptomatic household contact with COVID-19 within the last four days. That study started recruitment in September and wrapped up “during the peak of the Omicron wave,” Pfizer said.

What is Paxlovid rebound?

The CDC yesterday published a Health Advisory titled, COVID-19 Rebound After Paxlovid Treatment. It is a what-we-know-so-far read and spares me from needing to reference the journal of word-on-the-street. Paxlovid rebound has come to be defined as a recurrence of covid symptoms or test positivity after having tested negative following a course of Paxlovid. Most reports of Paxlovid rebound (including one among my patients) have occurred 2-8 days following completion of the Paxlovid course. How common is this? Unknown. In the EPIC-HR study discussed above, it was uncommon (~2%) and occurred similarly in the Paxlovid and placebo group. The doctor chatter, newspaper interviews, and twitterscience suggest it may well be higher now, at the least in need of formal remeasurement. I saw a twitter poll put out by Bob Wachter the Chair of UCSF Dept of Medicine (whose wife had Paxlovid rebound) that returned ~45% which seems unbelievably high and likely a reminder that twitterpolls are not science (as he freely admitted). Fortunately, as the CDC points out, the symptoms of Paxlovid rebound described in case reports have been mild, and “there are no reports of severe disease.” Therefore, the main frustration of Paxlovid rebound in addition to the return of symptoms is the need to re-isolate yourself to prevent spread. In their Health Advisory, the CDC formally recommended people with Paxlovid rebound re-isolate for at least 5 days, basically restarting their clock of CDC’s guidance on isolation. That news hasn’t been well received by people who thought they had already completed their isolation! The hypotheses on the mechanism of Paxlovid rebound are interesting but too long-winded and unproven for this newsletter.

Would you take Paxlovid if it were available to you, Sam?

I am lucky enough to not have any of the chronic conditions the CDC uses to characterize people as immunocompromised or of high risk of covid disease progression and severe illness.  Also, I view substantial prognostic differences between unvaccinated-people-infected-with-Delta, as were the subjects in the EPIC-HR trial, and vaccinated-people-infected-with-Omicron-variant, as would be my case if I were infected today. Therefore, for myself at this time, I would choose against taking Paxlovid for my mild to moderate covid even if it were offered to me very early into my symptoms.

My conclusion for myself may change depending on how the science plays out.

My conclusion for myself may well not be my recommendation for you, one of my patients, based on your personal health/age risk factors.

Please continue to inform us when you test positive for covid so we can advise you to the best of our knowledge.

In closing, the fiscal year 2020 US federal budget included $25 million for the CDC and NIH to research reducing gun-related deaths and injuries, the first such funding since 1996. May that funding grow and may the return on that investment be fewer dead innocent children and adults. May reasonable legislation like H.R.8, the Bipartisan Background Checks Act of 2021, proceed without further stalling (Passed House 3/11/2021. Received in Senate 3/11/2021. Placed on Senate Legislative Calendar under Read the First Time yesterday 5/24/2022 and for good reason).